Design Blog 92: Seasonal leaderboards – what, why and when 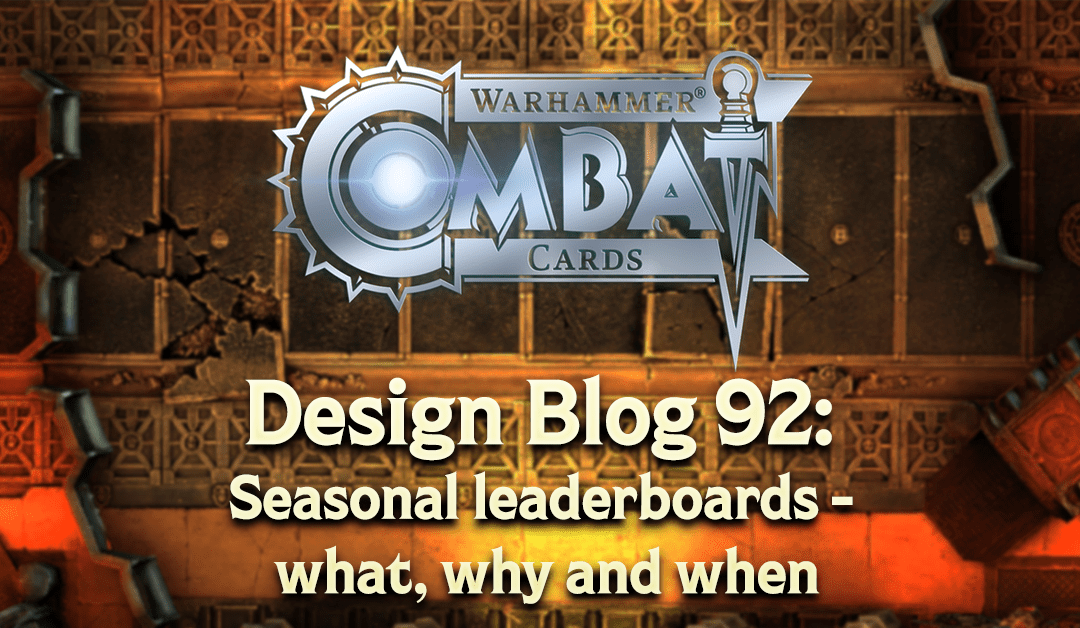 The Combat Cards team is working on a lot of different features, updates, improvements and fixes right now, so I’m going to share some of the work in progress over the next few posts, beginning with ranked mode.

Currently we have two game ‘modes’ – normal battles and Campaign battles. You fight normal battles to complete daily Objectives and to earn skull and victory packs, all of which lets you improve your decks. You then take those decks into Campaigns to earn prizes based on your final position and to unlock Mission cards on the way.

It’s a nice loop, giving short and medium term goals to work towards and a sense of progression, but it doesn’t A) provide long term goals or B) particularly drive competitive players.

Seasonal leaderboards are designed to meet those needs.

Before I dive into the details, remember that absolutely anything in-progress can (and probably will) evolve as we work on it. These posts are to share things we’re working on, not to commit the team to something which later needs to change. That said, here’s how the seasonal leaderboards are currently shaping up.

Sitting alongside normal battles, we will have a ‘ranked mode’ where you fight battles to climb that season’s leaderboard. We haven’t decided how long each season will last yet, but will start with a month or two and go from there.

Each season will have a number of stages that you advance through as you win battles (or retreat back down as you lose battles). Achieving enough victories will move you to the next stage and earn you immediate prizes (more on what these prizes are will follow in a later post as I don’t want to spoil the surprise).

If you win enough battles to reach the final stage of the season then you’ll be entered into a leaderboard with all the other players at the top tier and will battle to be at the top.

At the end of the season every player’s final position will gain them some more prizes.

Currently you can use any deck in your battles, but we’ll be adding up the results from several of your top factions to give you a score, encouraging you to use more than one in season.

Finally, everything will reset for the next season (though players may retain some of their previous position) and this all repeats with different prizes available. Phew!

All of the above sounds quite dry but obviously we’re going to present things in a Warhammer 40,000 appropriate way. I’ll share more on the lore we’re going to base all this on in a future blog post.

Seasonal leaderboards are still a little while off, though we plan to roll this feature out over several updates rather than holding it back until everything’s finished. That way you guys can play it as it develops and give us your feedback.

Hopefully it’s clear that this change won’t affect the rest of the game modes, so you’ll still be able to take part in normal and Campaign battles and so on (though it’s possible we’ll tweak things like how long Campaigns run for once this feature rolls out).

We’re excited about this feature and look forward to sharing more about it as it gets nearer to release. Let us know what you think. You can get in touch by leaving a comment below, through our Facebook page or by mailing [email protected]. Also, if you’d like to follow our posts through RSS you can use this link: https://www.combatcards.com/feed/