Design Blog 78: Back of card lore

One of the new features which you’ll see in the game’s next update is the ability to flip cards in your collection over to read more information on them. I’ve spoken about the feature before, but as that was a long time ago I thought I’d give some more insight into the background lore written on each card. 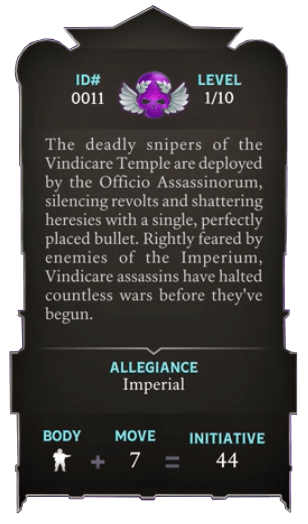 Work in progress example of the back of the Vindicare Assassin’s card.

While each card back includes details like its unique ID number, its rarity and how that card’s initiative value is worked out, the bulk of the space is taken up by 40ish words of background lore on the miniature featured by that card.

We’ve added this lore for two reasons: 1) Our data shows that Warhammer 40,000 lore is one of the audience’s favourite parts of our game, so over time we plan to introduce more of it. 2) While we’ve specifically made this game for 40K fans, we don’t want to assume that every fan knows the same amount of lore as everyone else. We’re also finding that the game is popular with audiences outside 40K fans, but that’s something I’ll dig into in a later post.

So, we want each card’s background lore to serve two needs – introduce the card to new players who don’t know much about the universe, while also being of interest to existing 40K fans who may not know every specific detail of the lore.

With this in mind, we decided to write the card lore ourselves, rather than copying text from Games Workshop publications.

This approach means we can ensure each card introduces one key concept, such as exploring something interesting or unique about that character. We’ve done this in layers, with cards you’re likely to get earlier telling you ‘basic’ facts, and later cards getting more esoteric in their lore (of course we can’t guarantee the order you’ll receive or look at cards, but over time you’ll build up a picture of the universe).

A second, smaller, reason for writing our own lore is it means each entry has a consistent ‘voice’, rather than some cards featuring background text from multiple authors and books, potentially written over many years.

A final reason for writing it ourselves is that I wrote the lore text, and as the lead designer on Combat Cards I got to give myself that perk. Actually that’s not the only reason for me to write the text – I’ve written scripts for many games over the years, so I have plenty of experience of working with other company’s brands.

The actual process for writing the lore is pretty straightforward. First I dig through our 40K publications, looking at White Dwarfs, Codexes, sourcebooks, etc. to find references. This lets us point at a specific piece of GW written text for each entry, rather than relying on memory about ‘some dude who did some thing and there were definitely skulls involved’.

I then write the text, which is passed to GW for feedback and approval, then finally to our localisers, who convert it to each language (and provide a handy editing pass at the same time, helping us spot spelong mistaks).

For me, the biggest challenges are ensuring I capture the 40K tone (where you get to use words like ‘perfidious’), and trying to get something you want to say into just 40ish words. Still, I have to admit that it’s cool to be producing 40K content, even in such a small way.

We’re looking forward to seeing how players take to the back of cards feature, and whether it helps to explain elements like card Initiative, or gives new players a clearer idea of the differences between a Great Unclean One and a Bloodthirster.

Like all our new features, player data will help us determine whether the feature is a success or needs to be adapted, but so will player feedback. So once you’ve had a chance to look at the card backs please do let us know what you think. Your comments and suggestions will help guide our future direction.

As ever, you can leave a comment below, email [email protected] or get in touch through our Facebook page.