Welcome to the latest entry in our painting series, where each month we paint 10 Power level of miniatures, ready for a final battle at Warhammer World. Unfortunately we had a lot of painting failures this month, and where I’d normally mention all the cakes this will get us, this month I’m just going to leave everyone who failed with this: 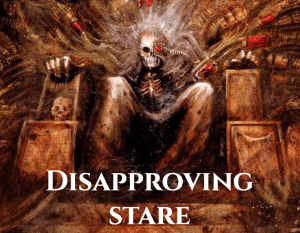 That’s right, not only have you let yourself down, you’ve let the immortal Emperor of Mankind down. Shame on you.

On the plus side that at least leaves plenty of space to look at cool models: 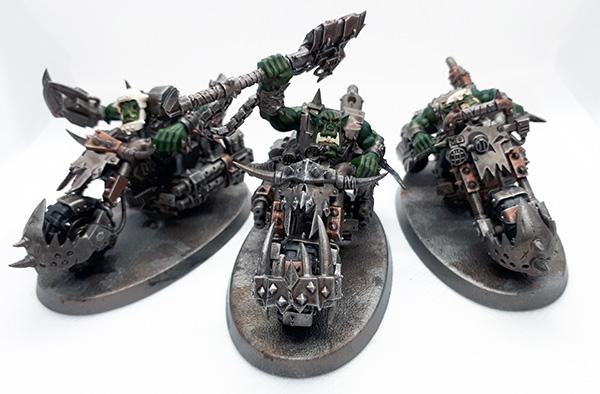 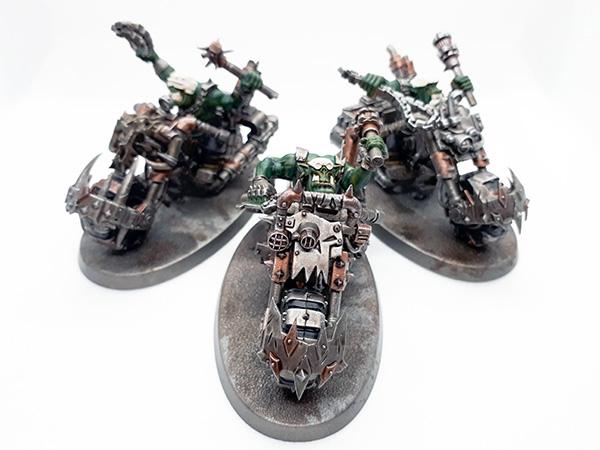 This month I’ve been painting the 6 Warbikes from the Speed Freeks set. I’ve gone through the same steps with all my vehicles so far: Leadbelcher spray, some Balthasar Gold to mix things up, loads of Agrax Earthshade, loads of Nuln Oil, then a dry brush of Necron Compound.

However, as the new Contrast paints were released on Saturday, I decided to change the way I’ve been painting Ork Skin. So I played with a few different base colours that would sit well under the Ork Flesh contrast paint. I tried reds, pinks, yellows and even a blue, but settled on Jokaero Orange which I’m happy with – mostly because its going to save me LOTS of time.

These 6 Warbikes don’t make up the total of 10 power points for this month, but I’m continuing to paint my 30 Ork Boys and 10 Gretchin in pieces, so I expect to show all of these at the end.

June is a month of non-stop birthdays in my family, so I wasn’t able to finish my full squad of boyz, which will be ready for next month along with my ‘Kustom Boosta-Blasta’. Any extra time my Mulligan gives me will be spent on eyeing up some new Ork purchases on the GW online store…. 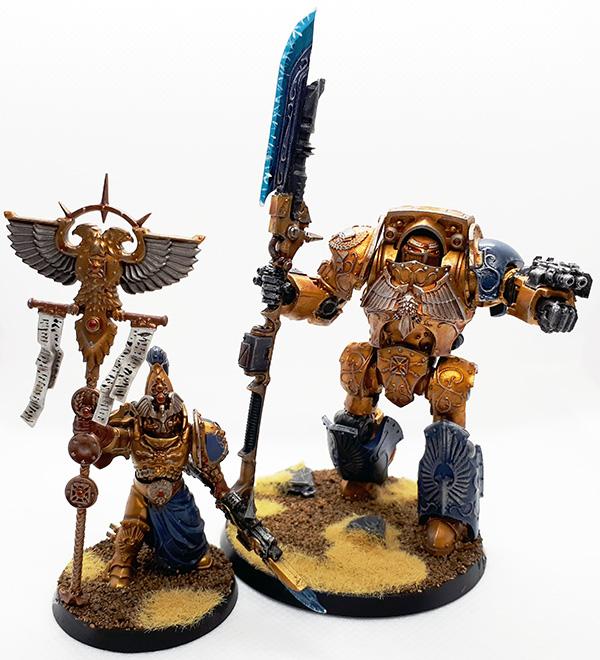 This month I wanted to do something a bit larger, so opted for an Achillus Dreadnought. I’ve never had a Forge World model before and enjoyed the experience of prepping the resin and the complicated build.

As this was only eight power I also made a Vexillus to get up to the requirement. This made use of the extra arm I painted back in month one…. which was nice.

Next month I’d like to try and bulk out my model count, so will do some normal Guard. 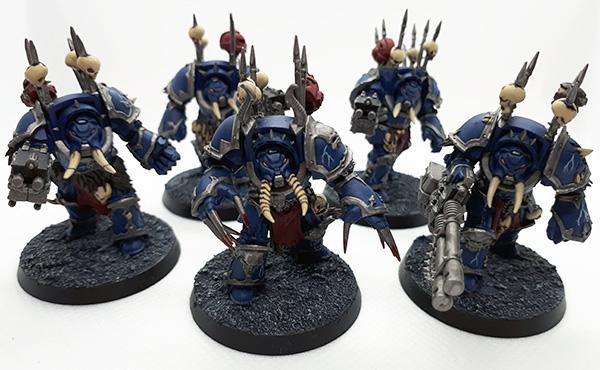 This month I got stuck into the new Chaos Terminator kit to make some of the (in)famous Atramentar for my Night Lords. I gave the champion some lightning claws so he can look all spooky and dramatic, and kitted the rest out in standard fare with bolters and power fists.

I was initially stuck with what colour to paint the space marine trophies fetchingly displayed on the terminator’s backs. I toyed with the idea of doing them as Space Wolves, but i didn’t have any grey lying around. So rather than incite Emyr’s anger I did them as Blood Angels as a reference to my first army, back when I was corpse-emperor worshiping fool.

Next month is gonna be all about the jump packs – it wouldn’t be a Night Lords army without some Raptors lurking about. 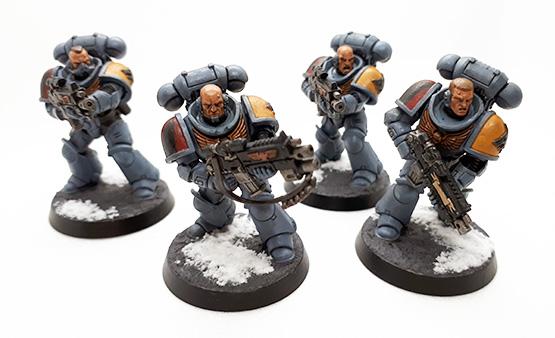 This month I fleshed out my troop count with some aggressors and more intercessors. It was a pretty close month, I only just finished in time. The aggressors had a lot more fiddly details than I had appreciated. I also learned about sub-assemblies, the hard way… If I ever do aggressors again, the arms and backpack are going on last. However I’m happy with how they turned out, particularly the pack markings. 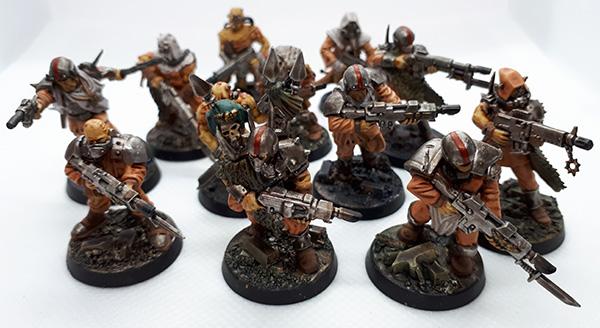 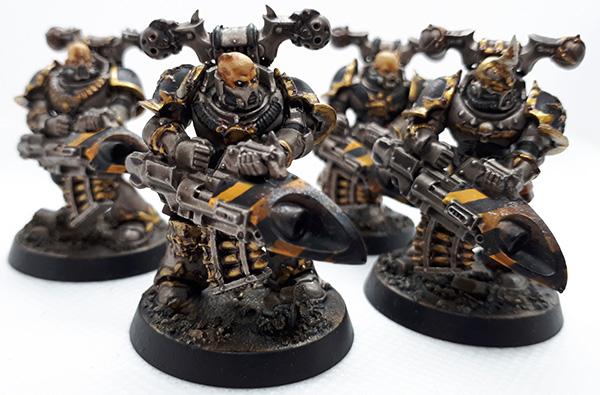 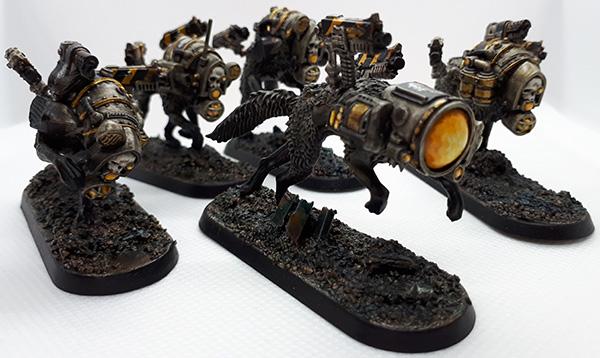 In next week’s post I’ll be talking about a 40K doubles tournament I took part in at Warhammer World. As I needed to get my army finished for that, I churned out several units this month.

First we have my cultists, dressed in fetching orange jumpsuits as I think they’ve just broken out of a prison (probably as the result of an Iron Warrior raid – I’ve learned that my cultists can’t be trusted to manage anything on their own).

Then we have the rest of a Havoc squad (we saw their missing Champion way back in part one of this series).

Finally, we have my super-weird dog / tracker / Dark Mechanicum experiments, who I use a Chaos bikes in game (they have two boltguns each, and two of them have flamers, so along with the correct base size, they’re tournament legal). These were complicated but fun conversions, which is exactly why I play Chaos in the first place!

This month I have been visiting sunnier places so have been unable to finish Belisarius Cawl (he has too may wires and little details!). I have however read the codex and intend to finish him, and the rest of the miniatures for next month. 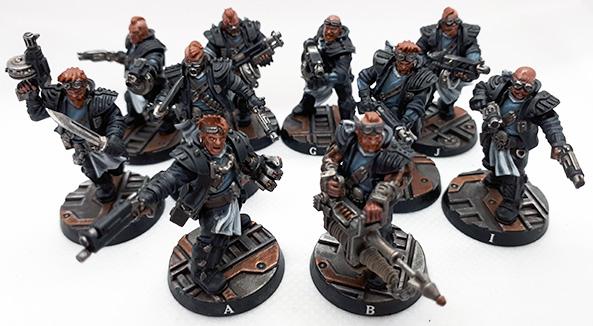 This month I painted House Orlock. It’s a pretty plain paint scheme, so it was a chance to practice painting efficiently. My most interesting learning was how highlighting the big areas of black with different colours has done wonders in making them look like different materials.

So, at least we had some cracking miniatures among the horde of failures. The penultimate post in the series will be in four weeks, and a couple of months later we’ll head up to Warhammer World for some gaming (hopefully with a blog post about how that turns out). In the meantime you can get in touch by leaving a comment below, through our Facebook page or by mailing [email protected]