Hi everyone, I thought I’d try an experiment with this week’s post – can I get across a difficult concept without it sounding like I’m ranting / complaining?

Y’see, each time I post one of these blogs, someone always comments that I shouldn’t be wasting time with this and should be fixing bugs instead. I wanted to try and address these comments, but I’m not sure my writing skills are up to it.

As I’ve mentioned before, I’m a big fan of wordsmithery, but I have to admit that it’s incredibly difficult to get tone of voice across with text. What the writer intends to say and what the reader actually receives are often very different, and this is particularly true if you’re responding to what someone else has said.

These blog posts are written by me, Stu (hello!), Lead Designer on Combat Cards. My role as ‘captain’ of the project means I’m responsible for the creative direction – that we make decision X, but not Y, so the game meets the ‘vision’ I have for it. Of course, this isn’t done in isolation – there are many voices involved, including the rest of the team, player feedback, advice from Flaregames and input from Games Workshop.

But the point is, I spend a lot of my time in meetings and calls, discussing ‘high-level’ topics, so I don’t tend to have time to get my hands in the game’s engine and implement much stuff.

Instead, all of this implementation is handled by the much more talented coders, artists, designers and audio types on the team, while the rest of us (production, QA, localisation, analytics, marketing, etc.) support them.

The game dev ‘pressure’ shifts between each of the team’s disciplines over time, depending on which area is currently most critical. Which – eventually – brings me to my point.

Right now, the team’s focus is on fixing issues and getting the game back up to (and then beyond) the old version. As it’s quite technical, most of this falls on the coders, who work out what’s causing the problem and how to fix it without introducing new bugs.

Of course they’re being helped by the artists and designers, but there’s a limit to how useful these disciplines can be right now, so instead they’re focussing on improving the game’s visuals, looking at its economy, refining the tutorial and things like that.

So if the artists and designers are one step removed from fixing the game’s current issues, those of us in support roles are even further away. I, personally, can’t do anything to help improve performance or fix glitches – in fact, the best thing I can do is stay out of the coders’ way, so as not to distract them. Instead, I’m working on future tasks and next steps – making sure we know where we’re going after this current phase of bug fixing.

So when someone posts ‘stop writing posts and fix bugs’ they’re kind of missing the point – whether I write a post or not has no bearing on how quickly the issues get fixed. Instead, I’m trying to offer some insight into the game development process (like this post), a look at the game’s future, or highlight other things which may be of interest to players.

Please don’t misunderstand – I get that when people write ‘fix bugs!’ they’re expressing their annoyance / disappointment that the game they’re enjoying isn’t perfect. I understand that, and believe me, I do read all those comments and inevitably take them somewhat personally – after all, as the game’s ‘captain’ its’ state is my responsibility. 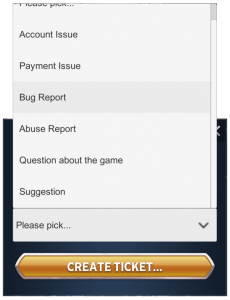 Sending us a support ticket is by far the best way of letting the team know about a bug or issue you’ve found.

However, if you really want your feedback to get to the right people, you’re much better off getting in touch through any of these means:

Looking back at this post, I still can’t tell if it gets my point across or sounds like I’m complaining. Still, I think it’s an interesting experiment if nothing else! Next week, normal blog posting will resume.