The Combat Cards team has been working on the game for a while now, and plans to expand and improve it for years to come. To avoid the problem of people becoming ‘burned out’ from working on a single game for so long we look for interesting challenges and activities for everyone to join in.

So for a bit of fun, we thought we’d have a go at our version of a classic series from White Dwarf magazine. 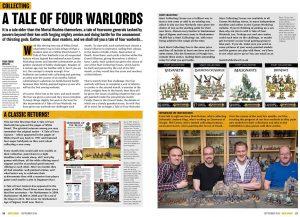 The modern iteration of the series from 2016

Long term White Dwarf readers may remember the ‘A Tale of Four Gamers’ series from way back in 1998. It’s always been a fan favourite and has been reintroduced in recent years as ‘A Tale of Four Warlords’. Each month, four people build and paint a small number of miniatures, eventually ending up with a new army, which they then take into battle against each other.

Though our team includes several veteran Warhammer 40,000 players, we also have people who’ve only dabbled with painting, so this ‘paint a few miniatures a month, end up with an army’ approach is ideal for them.

So we’re kicking off our own version, ‘A Tale of 13(ish) Painters’, and I’ll be reporting on our progress (and listing those who fall behind) over the next five months.

Each month, we’ll need to paint 10 Power Level (or 200 points) of Warhammer 40,000 miniatures for our new force, ending up with a 50 Power Level / 1000 point army. The team will then head to Warhammer World for a battle with our new armies.

I’m doing Night Lords, because despite being one of the coolest traitor legions, with a great backstory, they’re criminally under represented on the table. I’m going to try and play into what the Night Lords do best – be terrifying and rip things to shreds. So expect my army to have lots of Raptors and lots of lightning claws.

For me it has to be Genestealers. I had an army of them back in the day (complete with Cult limo of course) and the new models are amazing. A logical approach would be to start with some rank and file and build up my force sensibly but where’s the fun in that?

I’m painting Space Wolves. They’re Vikings, in space. As a Blood Bowl player, that works for me. Plus their Dreadnought has an axe and shield.

As a newbie to painting I wanted to choose something with a few units worth a lot of points, so that I could spend the time (trying) to learn how to paint properly. Deathwatch especially appealed as they are elite units, pulled from a lot of chapters. I’m most excited to get to paint a Dreadnought (or two)!

The challenge of painting yellow has always intrigued me, so what better way to do it than with an Imperial Fists force using the awesome Primaris Space Marine range? I’m looking forward to putting my skills to the test and painting an army I can be really proud to put on the table. For Dorn!

I have never painted an army before and to be honest I have never really played Warhammer 40K (chorus of groans), despite spending quite a few hours of my teenage years looking longingly through GW shop windows. I will be painting a Death Guard Army – because they are super gross and disease ridden.

After a 20 year break from painting, I decided to build Adeptus Mechanicus as they were not around back in the day and appeal to my love of tech! Goblin Green bases are still cool right?

In the past my armies have always been the bad guys, Tyranids, Chaos, Thousand Sons, etc. Wanted to see what it felt like on the other side so, I’ve gone for Adeptus Custodes. Those guys look amazing and weren’t around when I played originally. I’m also not a strong painter so the Retributor Armour spray is going to help loads.

I’m a complete Warhammer newbie who’s only recently started painting roleplaying mini’s – I wanted to paint the maddest thing I could, so Orks were perfect!

I chose Death Guard, using the Pallid Hand colour scheme. I always thought that Nurgle models looked the most fun to paint, with all the variations coming from Space Marine gear and horrible mutations, so this is a good opportunity to give it a go. The other reason is that if I mess up some models, I can always say it was meant to look like that.

I’m painting T’au because I think they look cool – I’ve always had a thing for hard sci-fi. I’m inspired by Neill Blomkamp’s corporate-military style, and want to mix that with some cyberpunk / sports car elements. I’m going to begin with a Riptide Battlesuit.

I already have a Death Guard army, so I’m going to paint a force centred around Cypher and the Fallen – that way I’ll be able to ally them together later. I love converting stuff, so am going to use a mix of all sorts of kits to create my force. First up, Cypher himself, plus some cannon-fodder cultists.

I had never painted or played Warhammer before we started working on Combat Cards, so Stu kindly lent me some Orks so we could play Shadow War. I painted six of them using Evil Sunz scheme and got hooked. I’ve been painting Space Marines since then, but miss my Orks, so have the Speed Freeks box set which is perfect for growing an Evil Sunz army.

We also thought it would be fun to invite any Combat Cards fans who’d like to join in! If you’d like to commit to painting an army over the next five months, send a mail to [email protected] and let us know. Each month you’ll need to send us a picture of your progress and any notes on how you’ve got on. I’ll post your progress here, and there may even be in-game prizes for everyone who completes the challenge.