Stu – This week’s blog is a guest post from another member of the Combat Cards’ team. Rather than write a long intro, I’m going to hand you straight over to Thanos:

Hello, my name is Thanos and I have been working as a designer on Combat Cards for the last month. My aspirations are as large as the other Thanos’, so I have taken on the task of designing the clans functionality. You may have seen the clans tab in the game and wondered what goes into designing a feature the size of a Titan, well let me explain.

The best way to deal with a task this size is to hack it up into small parts, preferably with a chainsword, and approach each part separately. First, we start by thinking about we want the feature to do – in this case to bring the community together and give them a place to discuss the game, give advice, and hone strategies. The next phase will allow players to crush the skulls of their enemies, but that comes much later.

Second, we create a ‘map’ of the flow of the feature, trying to foresee every step the player could take in this feature. Having mapped out the feature we can start to do mock-ups of how the screens might look. At this point we might realise that some of the assumptions we made before are not correct and have to go back to the map and move things around. My mockups are ugly, but they get the message across. 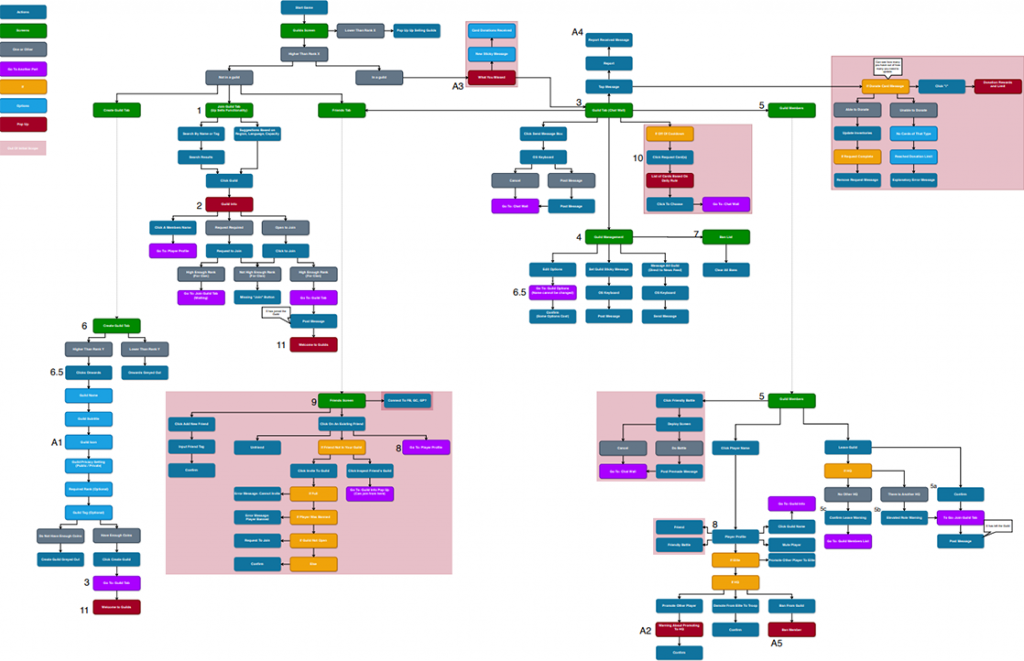 Spoiler: there are a lot of different permutations.

The next and best part of the process is hammering out the details with the other disciplines. By best part I mean it can sometimes be a bloodbath, as everyone comes to the table from a different angle. Artists might want to know exactly which elements are on which screen, while coders have input on how tricky it might be to implement, but in this case we were all quite aligned.

Again, at this point, we will make changes to the map and mockups based on feedback. Everyone here plays games, and has opinions on how a feature like this should be implemented – all opinions are valid, so I try to incorporate, or at least consider, each suggestion.

With work underway on the feature, I am sure that the final result will look quite different from what is currently in my mind, but at least by taking the due diligence before starting we can narrow down the possibility space of the feature (more on possibility spaces in an upcoming post – Stu). Design is all about anticipating the possible routes we could take and shutting down any that we think will lead to dead-ends; we are not omnipotent but we can act as a Astronomican style guiding light.

We will continue to develop clans after their initial release – we intend to add additional social functionality as well as a clan-vs-clan feature to create conflicts with the massive scale Warhammer 40,000 fans expect. We want to get these features right, and give the best possible experience, so it might take some time to get them in the hands of players, but rest assured we have some really interesting ideas for the future.