While all the cool miniature artwork on our cards is provided by Games Workshop, the borders are created by us. Until now, every card in the game has been using the Space Marine faction border, but as you may have noticed, we recently added the Chaos border.

Over the next couple of months we’re going to add the rest of the faction borders, and we’re going to let players decide the order we create and add them. We thought about a poll, but decided that’s really not very Warhammer 40,000, so instead you guys get to ‘vote’ in the most 40K way possible:

With the Chaos border just added, they’re not going to be involved in this vote, so what if one of the dark powers of Chaos was behind the whole thing?

Where the other Chaos gods can be cunning or direct, the subtle machinations of Tzeentch lure others into doing his bidding without even realising it.

Tzeentch enacts his inscrutable will through his agents – the Thousand Sons, Tzaangor, Pink Horrors, and, most mighty of all, the Lords of Change.

Now, Tzax’lan-tar, Lord of Change of Tzeentch, has manipulated the mortal races into battle with each other for reasons lesser minds can only guess at. Which faction will come out on top, and who will be crushed underfoot?

From 23rd July, the game will track each time one of these factions wins a ‘normal’ (not Campaign) battle:

So if you have a favourite faction then take them into battle – the spoils of war (i.e. their card border) await!

When the winners are declared, we’re also discover if the master manipulator behind it all will be revealed.

Each new piece of artwork that goes into Combat Cards is concepted first, letting our artists explore themes and approaches before going too far in one direction.

These are our concepts for the rest of the faction borders:

Work in progress concepts of the new card borders. Close-ups are below.

They’re black and white for now because choosing their colour schemes is a long, iterative process, so will come later. Each faction has many possible colour schemes (look at the different Tyranid hive fleets for instance), and has to work without clashing with any of the faction’s cards. 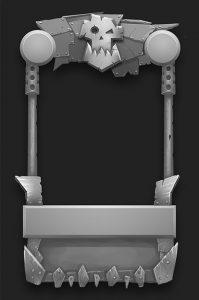 The Ork border needed to look brutal and heavy, but also ramshackle and ‘smashed together’. We were inspired by the Ork Trukk’s armoured panels and mismatched pieces, showing how the Orks favour results over style. Rumours that red cards go faster are being denied. 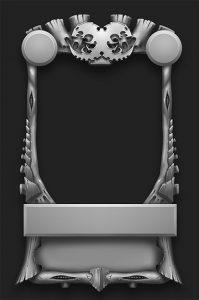 The Tyranid border needed to look organic and grown, but also match all the Tyranid design cues established by Games Workshop. Elements like the six spine vents and armoured bone plates make it clear which faction’s border this is at a glance. 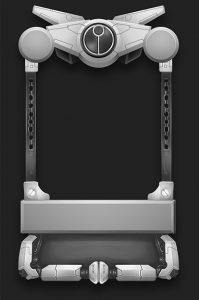 The T’au border is clean and direct, without fancy frippery or battle damage. We incorporated the recessed panel lines, vents and vanes seen on T’au battlesuits, and broke up all the straight lines with the circular design which is unique to the T’au. 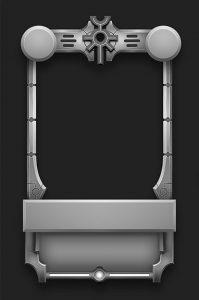 The Necron border is no-nonsense, plain metal, and incorporates elements associated with them, such as glowing panels and sharp edges (particularly the scythe-like elements above the nameplate). Note that the top of the border echoes the torso and shoulder design of Necron Immortals. 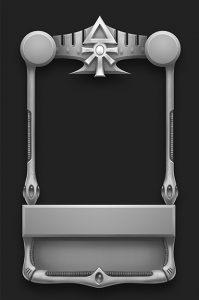 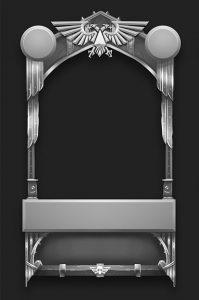 The Servants of the Emperor border has to capture the solidity and weight of Imperial architecture and gear. We also wanted to make sure if stood apart from the existing Space Marine border, with more detail and ornamentation than the severe, focused Marine border.

Hopefully everyone enjoys this chance to get involved in shaping Combat Cards, as we plan to run this sort of event in the future.

Keep an eye on our Facebook page for updates on the progress of each faction and unlocking Tzax’lan-tar, and get in touch if you have any feedback. You can mail [email protected] or just use Facebook.