In a way that’s sure to please the ever-evolving Hive Mind, the Tyranid faction is all about adaptability. They’re one of Combat Cards’ most balanced factions, able to do well at ranged, melee and psychic attacks. 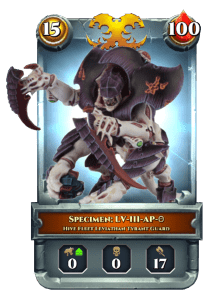 Work in progress example of a Tyranid card.

This means you can focus on just one of those areas – gambling that you won’t meet an opponent who’s better than you at that attack – or build a deck that can fight in two or all three of the attack types. Personally, I’d go for two attack types, as this gives you the flexibility to react to your opponent’s strengths.

Why not all three attack types? If you’re lucky, including all three attack types in your deck can pay off by letting you always pick the optimum move, but you may find that the random card draw means you can’t get the cards you need onto the battlefield at the same time (leaving you weak in every attack). It all depends on how big a risk you’re willing to take, and how large your deck is.

Which moves us on to deck building. First, how many bodyguards should you include?

Tyranids can easily build horde style decks, using cheap Hormagaunts and Genestealer Cultists to fill all eight bodyguard slots. On the other hand they – like Necrons and T’au – have access to some very high Wound, high cost cards.

While it may be tempting to add a high Wound monster to your deck as soon as you get one, you may find you then don’t have many points left, leaving one of your battlefield ‘slots’ empty. This means two of your opponent’s cards attacking your centre card slot (where your Warlord will go) each round. If this keeps happening then you may want to save the high-cost card until you increase your Rank and get more points for deck building. 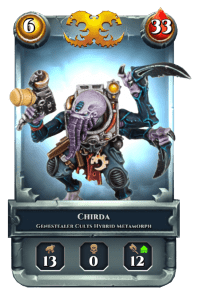 Work in progress example of a Tyranid card.

Another interesting point about the Tyranids is that a lot of their cards have psychic attacks. While it can be tempting to use this to deploy three psychic cards together (letting you attack without retaliation), this means none of your cards will be Readying.

As a result you’ll build up your attack buffs more slowly, so may not be able to unleash the killer blow at the end of the battle. You can get round this by effectively building two ‘waves’ into your deck, with the first wave making all psychic attacks and slowly building up the damage of the other attack types, and the second wave having no psychic powers but able to use the buffed attacks when they arrive (or you can do this tactic the other way round).

Of course, the trick with this is balancing the size of your deck so you have a good chance of getting each wave out together, but with practice this tactic can be devastating.

So, build decks that can adapt to your opponent, ensure you have enough swarms to support your monsters, and attack in waves. Sounds like I’m describing a Tyranid assault as much as a card deck, right? It’s almost as if we were guided by a vast intelligence from beyond the stars…