If you’re a designer on a ‘live’ videogame (as opposed to boxed, shipped-and-done game), then a lot of your time is taken up with questions that you can answer, but will never know if you chose the ‘right’ answer.

As your seniority increases you become more and more responsible for intangible things, like deciding direction, setting priorities, and guiding how the game ‘feels’. Every single game is the result of thousands of these soft decisions, leaving many alternate universes where Game X plays slightly (or completely) differently.

What am I going on about? Let’s take a specific example from Combat Cards which has come up recently. There’s no definitively correct answer to this, so welcome to the ‘I wonder what would have happened if we’d chosen a different answer’ world of being a videogame designer! 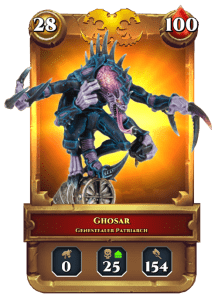 Work in progress art of Tyranid Warlord Ghosar. This shot is from near the end of a battle, so note the very high melee attack stat.

Naturally, this leads to a couple of obvious deck building strategies – include melee focused cards, and try to keep the battle going for as long as possible (either with high Wound cards or a horde of cheap cards).

Due to a combination of factors, players tend to get Ghosar early, meaning a lot of the decks you play against right now are built around him. And when he appears you’re suddenly facing a Warlord – which you have to destroy, don’t forget – who’s inflicting over 100 damage per attack.

So, here’s the question – should we tone down Ghosar’s special rule? Is it so powerful that it’s what’s known as a ‘dominant tactic’?

If it is, then it’s a big problem, because if video games are defined as ‘a series of interesting decisions’ then making one answer clearly correct will quickly make the game boring. After all, the game is about winning battles, so if one Warlord is definitively the best at that, why bother collecting any others?

But is he actually so powerful as to be ‘broken’? Ideally we’ll use win / loss stats for battles involving Ghosar, so this question will get easier to answer the more countries Combat Cards is released in. But currently it’s only available in Australia and the Netherlands, meaning we don’t have a huge data-set to draw on.

As I said earlier, there isn’t a single, demonstrably correct answer here. We’ll have to use the data we have, our experience, industry best-practice and gut instinct to decide what to do.

Some people might find never knowing if they made the right call frustrating, but these decisions come up every day for videogame designers (and you thought design was all fast-cars and jetpacks).

Feel free to let us know which direction you think we should take. You can contact us via [email protected] or through the Combat Cards Facebook page.