This week we’re looking at probably the toughest of the Combat Cards factions – the Necrons. And by tough – yes, I mean they’re hard to kill, but also difficult to use with full effectiveness. So let’s explore why.

Miniatures in tabletop Warhammer 40,000 can be hard to kill in several ways – high Wounds or Toughness, a good Save, through special rules, etc. In Combat Cards we boil all of that into how many Wounds a card has (and which trait it gains through upgrading, but we’ll talk about traits in a later post).

High Wound cards are interesting because they need thought to use. What? Surely you just plonk them down and sit back while the victory skulls roll in? Unfortunately it’s not as easy as that, because being able to move cards around as you deploy new ones means opponents can stall your high-Wound monster while they take out all your smaller cards. 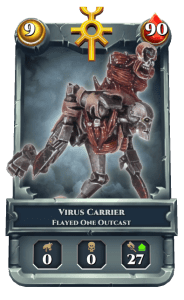 Work in progress example Necron card. Note that this is not final art and may still change before launch.

You can counter this somewhat by deploying your high-Wound card in the centre. This means you can slide it to either side when you deploy another card, letting you get it in front of whatever you want it to block – but you’re still a card down each time you use this tactic.

Another tricky aspect of using Necrons is their lack of psychic attacks. They’re great at ranged combat, and can be surprisingly effective at melee, but don’t have any way to respond to a psychic heavy deck.

How to get round this? Well, obviously you could take some psychic ‘ally’ cards from another faction, but they might not benefit from your Warlord’s special rule, and some players aren’t keen on mixing factions like this.

If you don’t want to fight back like that, then you need to neutralise their Psykers. You could use one of the high-Wound monsters we mentioned earlier – dropping them in front of the Psyker to keep them busy for ages. Or use the classic tactic of just killing them! Psykers don’t tend to be that tough, so deploying your high-damage cards opposite them can take Psykers out before they do too much damage.

Finally, something that you might not have considered is that you can choose the psychic attack too. Naturally this means that none of your cards will attack, but each one of them will Ready, boosting your next attacks. 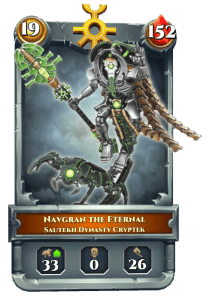 Work in progress example Necron card. Note that this is not final art and may still change before launch.

If your opponent only has a single Psyker deployed, then the small amount of Wounds you’ll lose could be worth the pay-off of being able to unleash a really powerful attack next round.

The overriding theme of using Necrons is deployment. You need to consider where to put down each of your cards to get the most use out of their strengths, and to offset their weaknesses.

If you can master that, then the Necrons can hit hard in both ranged and melee combat, letting you exploit your opponent’s weaknesses and react to changing situations. Besides all that, who hasn’t wanted to command an army of immortal, murderous space-robots at one time or another?

As ever, get in touch if you have any questions or have spotted any cunning combo’s you want to share. Mail [email protected] or visit the Combat Cards Facebook page.