Hi, this week I’ll be giving some insight into how the Aeldari faction plays in Combat Cards – there’s a lot to cover, so let’s get started.

First up, you have the problem of choosing which direction to take your deck. The Aeldari faction covers the Craftworlds, the Drukhari, the Ynnari and the Harlequins, so you have a huge range of choices and potential strategies.

If you’re happy to mix all those ‘sub-groups’ in your deck, then it’s easy to focus on a specific attack type – ranged (Wraithguard, jetbikes), melee (Harlequins, Howling Banshees), or psychic (Yvraine, Warlocks). Or you can mix and match to give you flexibility – but be careful that you don’t end up being worse than your opponent at every attack type, and being stuck with only bad attack choices. 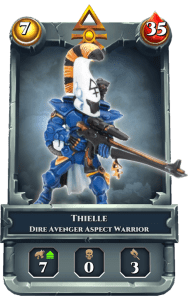 Work in progress example of an Aeldari card. As with the rest of the game, our card art isn’t final and may change before launch.

One area that the Aeldari excel is their speed. We haven’t covered how deck initiative works yet – so look for that in a future blog post – but suffice to say, Aeldari decks tend to be fast. As you’ll usually be getting the first attack choice, you can position your starting cards to take advantage of that.

One area the Aeldari traditionally lose out is lack of Wounds, meaning your cards may only get an attack or two off before being destroyed. Take Lathrangil, the Harlequin Solitaire for example – he can dish out an enormous number of Wounds with every attack, but as a ‘glass cannon’ he won’t survive too much retaliation.

So how to get around this? You have two choices – a large deck, or some anchor cards.

If you fill your deck with the cheaper Aeldari cards you can win by simply out-surviving your opponent. Sure, each card only gets a couple of hits in before it’s destroyed, but those hits add up. The challenge with large decks is ensuring you get the right combinations of cards down at the same time.

Or you can take a couple of anchor cards in your deck to give you the Wounds you need. For instance, a Wraithlord or Talos can hold up your opponent’s most dangerous card, leaving your powerful but fragile cards to inflict damage on the rest. 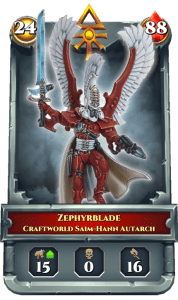 Work in progress example of an Aeldari card. As with the rest of the game, our card art isn’t final and may change before launch.

Finally, let’s talk about one of the Aeldari’s strengths – the number of Psykers they can field. Because Psykers tend to be rare (and some factions don’t have any of them), a deck focussed on this attack type can find itself with a ’free’ attack choice each round (as in, free because you can make this attack and your opponent doesn’t get to retaliate).

However, you may suffer if you come up against some of the nastier Psykers out there, and you may play into your opponent’s hands if you keep making them Ready an attack type they’re good at. For example, if you continually choosing to make psychic attacks causes a Tyranid deck to constantly Ready its melee attack, then sooner or later they’re going to use that boosted melee power to unleash a painful attack.

To sum up, Aeldari deck’s strengths are their flexibility, speed and psychic potential, but you need a plan to deal with their fragility. As with tabletop Warhammer 40,000, this makes them a faction for experienced players, but great fun when you get all your combo’s working perfectly.