After discussing Space Marines a few weeks ago, it’s time to look at another of the Combat Cards factions. This time, the ever popular Orks.

Like the Space Marines, Orks have access to tough, powerful cards. Killer Kans, Deff Dreads and Meganobs all have enough Wounds to stick around after being attacked, making them ideal to hold your centre card slot (the card in the centre is more likely to be hit than the ones on the flanks, as that’s where cards will attack if there’s no target opposite them to hit). 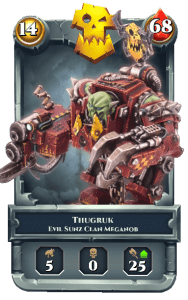 Work in progress example of an Ork card. As with the rest of the game, our card art isn’t final and may change before launch.

This gives Ork players the ability to overwhelm their opponents with a large force, grinding down their Wounds until you bring in your Warlord to finish the job.

Another way this can work is through sacrificing card after card to hold up the enemy, while you build up a huge modifier on one of your attack types. Then you drop in a big hitter, and use that built-up attack in a devastating blow. For example, building up a psychic attack and then dropping in a Weirdboy to blast something off the battlefield.

The trick with this is when to bring in your ‘big gun’, and where to deploy them. After all, you don’t want to waste a huge attack on a card with almost no Wounds left. Should you try to hold that attack for the opponent’s Warlord, or will you lose so many cards doing so that you have nothing to finish them off?

Another interesting area for Orks is that, just like ‘tabletop’ Warhammer 40,000, they tend to favour melee combat over psychic or ranged.

While this can lead to a nice, straightforward strategy (it’s hard to go wrong with choosing a Warlord and building a deck around simply punching stuff), it can mean that Ork decks lack flexibility.

As difficult as it may be for a Warboss to accept, there are 40K armies (such as melee focussed Tyranids or Chaos) that can beat them in a straight hand-to-hand fight. So, if you’ve built your entire strategy around this one tactic then you’re in trouble.

Far better to ensure you have two attack options, letting you react to whatever your opponent is weak at. This is another area where taking a large deck gives you an advantage – letting you bring in the cards most suited to the attack type you’re focusing on. 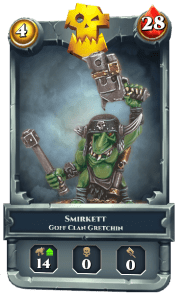 Work in progress example of an Ork card. As with the rest of the game, our card art isn’t final and may change before launch.

So, Ork decks tend to favour simply dealing out melee damage, but even then you need to build around their advantages, and work out how to minimise the risk that you come up against a deck that can out punch them.

Of course, one area that I haven’t had space to discuss is the types of decks you can build if you combine Ork cards with cards from other factions. After all, Orks don’t tend to care who they fight alongside, as long as there’s a good scrap to be had…