Welcome to the first detailed look at one of Combat Card’s factions. Each of the drill down posts will look at some of the combo’s you can set up with that faction’s cards, as well as offer hints on their general fighting style. 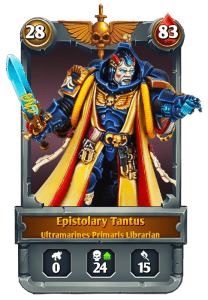 Work in progress example Space Marine card. Note that this is not final art and may still change before launch.

Space Marines had to be looked at, because they’re the iconic Warhammer 40,000 army, and the deck that all new Combat Cards players get to use.

We made that choice because Space Marines in Combat Cards have the same attributes they do in ‘tabletop’ 40K – they’re tough and flexible. This makes them ideal for learning how to play Combat Cards, but can also feed into deeper strategies as you become more experienced.

Depending on how you build your deck, you can focus Space Marines exclusively on melee, ranged or psychic combat, allowing them to fight like the other, ‘specific attack focussed’ factions (i.e. as you’d expect, T’au decks tend to favour ranged attacks over the other types).

But this may be wasting one of the Space Marine faction’s advantages – their high Wounds. Why is that important? Because it means you can rely on your cards to stick around long enough to set up combo’s.

What I mean is, with a Space Marine deck you can afford to take cards that are pretty good at two of the attack types (rather than purely focusing on one type). Doing this will mean you can react to your opponent’s deck and fighting style more effectively.

For example, I mentioned ranged attack focussed T’au decks earlier. These may struggle if they come up against an opponent that can out shoot them, but a Space Marine deck can be flexible enough swap between multiple attack types.

Of course, you can (and should) ensure you have some tactical flexibility with each of the decks, but the Space Marine faction’s high Wounds mean it’s easy to get several cards with your favoured attack type on the battlefield at the same time. Factions with ‘flimsier’ cards may find they can’t keep specific cards alive long enough to match them with other cards with the same attack type, diluting their attack choices.

As with all factions, your Warlord choice will affect how you should build your deck. Space Marine Warlords tend to focus on preparation and getting an early game advantage over your opponent.

Combined with the toughness of their cards, it means Space Marines can inflict a heavy blow at the start of the battle, then weather the retaliation while they build up attack modifiers for a second powerful attack. 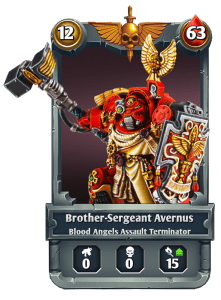 Work in progress example of a Space Marine card. I have a future post planned that will go into how our card art has (and still is) evolving.

Alternatively, you can use that toughness to save the early advantage until later, building up a huge strike over several rounds, then unleashing it on a critical opponent or the enemy Warlord.

However, this approach adds the risk that if your cards best suited to making the attack type you’re building up come out early – or are destroyed before you can trigger it – your effort was wasted.

I plan on revisiting each of the factions again, once we’ve added new cards to each of them, so get in touch if you have any questions or have spotted any cunning combo’s you want to share. Mail [email protected] or visit the Combat Cards Facebook page.