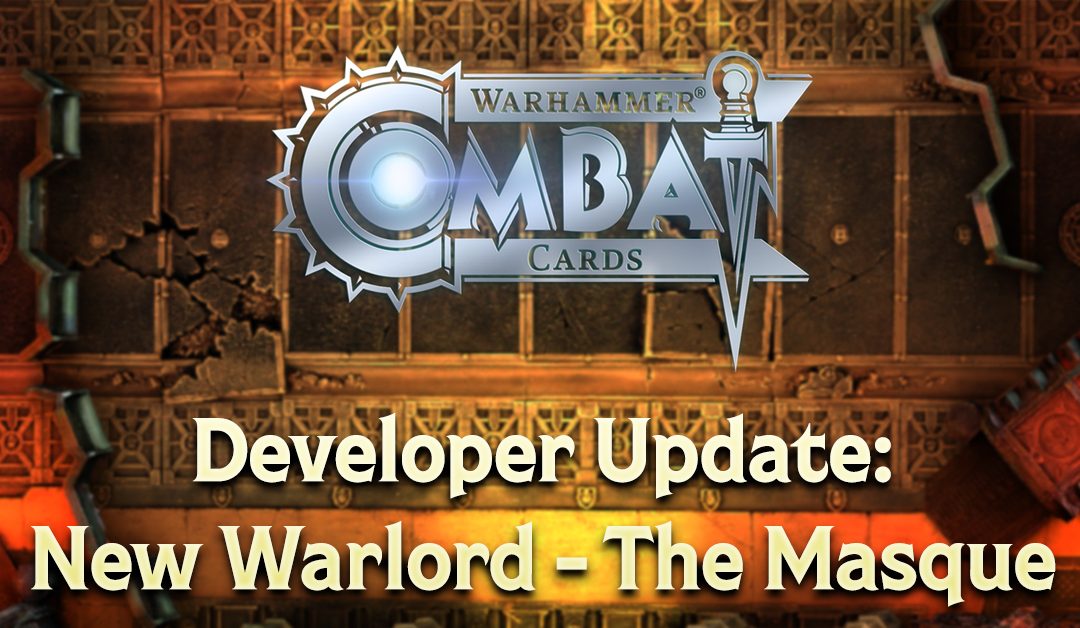 It’s been a while since we’ve had a warlord reveal in the form of a blog post – since we started the live streams. Due to life’s habit of getting in the way, we haven’t been able to get a live stream together this time round; however I will try to make sure this blog post has the same level of detail you’ve come to expect!

So as many of you have rightly guessed (which may or may not have to do with her being viewable for a while in the dev builds seen on the livestream…) the next warlord for Chaos is The Masque!

By bringing the most notorious daemonette and herald of Slaanesh to the game, we’ve finally rounded off the Chaos warlord roster with representation of all four Chaos gods, as well as Abaddon for Undivided. It’s a good feeling now that whichever Chaos god you’ve pledged your allegiance to, you have an option to represent that in game.

You may have noticed that we’ve been stepping up the Slaanesh presence in the game and that’s been leading up to the Masque’s release. Overall we now have enough options that should any purists want to run a deck that is purely dedicated to one god, they can do so, and while being competitive is important, we all know that 40k fans at heart love running decks that are as thematic as possible. So with that in mind, before we fully reveal the Masque, we have one more Slaanesh daemon joining the roster to round off the list for her: The Fiend!

The Fiend brings the much overdue addition of a Target Acquired card to Chaos. As voracious hunters able to sense the emotions and fears of their opponents, it seems like a fitting trait and is a great addition to the Chaos melee build, while also having uses in both Ranged and Psychic builds with its melee debuff. Coming in at the middle of the price bracket, it delivers an impressive melee attack. Having a strong primary attack is always a great addition to a TA card as it makes its first few turns on the field even more impactful. It also has a good distribution of melee attack upgrades in the early-mid levels, meaning it can start packing a punch very quickly. With the Fiend covered, on to the main event, The Masque herself!

Let’s start by having a look at her stats and level tree.

So the first thing to note is that she comes in as the cheapest Chaos warlord now available, which is always a positive, particularly with Chaos where there are a lot of big cards that you want to be squeezing into a deck. With that though comes the risk of slightly lower Wounds, and while she does get up to nearly 200 Wounds at max level, you still need to be careful when she hits the field. She has a middling melee attack, which boosted by her inspiring presence means that she does have some decent damage output as she grows. However, her biggest strength, and defence, comes from her Special Rule.

This is a new concept for a special rule, and brings into play a mechanical difference between attacking and defending. This means that fighting against her takes an extra bit of caution and calculation and may force you into picking a less favourable attack type to ensure your own card isn’t killed before making an attack. Worth noting is this applies to all attack types, so the Masque supports any attack type build, which is always useful. This is quite a strong ability so the health threshold is quite high for this one, meaning that while the potential for this rule is huge, without careful management it can quickly fall apart. Ensuring good use of taunt and fear while avoiding additional damage, such as direct damage traits, means that she’s a really engaging warlord to play, and one that poses a challenge while both playing as her, and against her.

Overall I’m really excited to be bringing her into the game and I think it hits the boxes for a thematic rule which is also fun, different and competitive. Let us know your thoughts and how you plan to be using her!