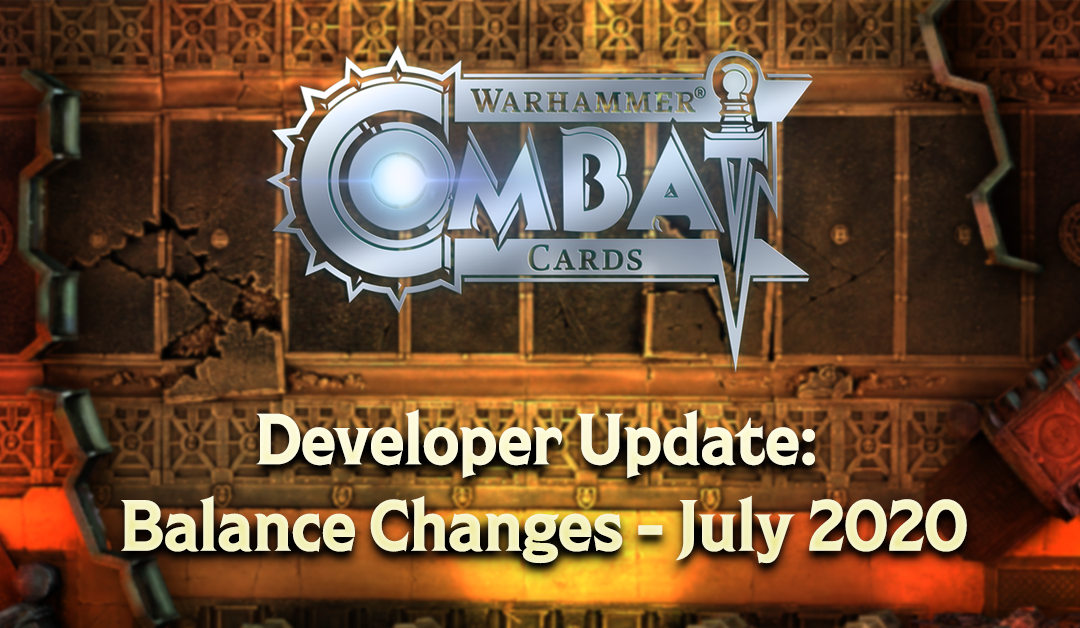 Hi everyone, this will be my first blog post for Combat Cards, and it’s going to be a big one! Most people will recognise me by my game handle MadEmp, and for those of you who don’t, I am a new hire for Well Played Games joining as a LiveOps Designer having been an active member of the game community.

We have had a good look at all factions and have made improvements to seventy-eight cards overall and five cards have received points increases.

How did we make these decisions? First of all we decided that our priority would be to make cards more attractive rather than less so, which we think is by far the fairest way to run balance changes. With that in mind we cross referenced cards with the lowest selection rate and the lowest overall stats, which gave us the foundation for these changes.

We’ve not limited ourselves to just points changes, we have also made some changes to base stats, and in a few rare cases changed their upgrade path. This is because while we want to make this a balanced card game we still want to ensure it is very representative of the tabletop game. Therefore some cards shouldn’t be cheaper, so it made sense to instead make them intrinsically better.

Tactical Precision (Brother-Lieutenant Tolmeron’s): +25% to +20%.
We’ve addressed the strength of Baddrukk’s Special Rule in the most recent changes, and Tolemeron also stands out with a very high selection and win rate so it seemed only fair.

It seems to be cards with this trait have a universally low selection rate, and this does seem to be down to trait as a good proportion of these cards are strong stat-wise.

Introduction of better deployment and trait interactions to Ranked

We are also introducing the trait and deployment changes which we have been running in the campaigns into ranked mode. We feel these changes have made a big difference and have been very positively received in the campaign. We want to see how this change affects a lot of the traits and warlords before we make any further changes to game mechanics.

As mentioned above, Badrukk and Tolmeron do dominate in the pick/win rate ratio and so some of the most powerful and popular cards from each of those deck are getting a slight points increase:

We’ve tried to keep these increases minimal, and we think these are fair and will bring them in line with a lot of similar cards.

We have the full list of improvements here divided out by faction, with a small write up of our thought process arounds each of these changes

Eldar suffer from some of the more expensive cards in the lower end of their roster, and while the Eldar are quite elite as a faction this does unfairly penalise a faction that works best when bringing a full deck. As such the following cards have received points reductions:

As well as points reductions there are a few other cards that were performing below a lot of equivalent cards and due to their elite or leadership status didn’t suit a points change and instead have had an improvement to their stats:

Stat Increase: +8 Base Wounds, +6 Base Ranged

Necrons have some of the highest cost cards and their lower half of their roster is the most expensive bar only Space Marines. As such we’ve lowered the cost of some of the lower end cards to open up some more filler options and give more of the impression of the unending machine tide that Necrons are famous for.

Two further Necron cards have had changes not related to cost:

We felt four was a fair costing but a small increase in wounds would make it a more attractive and representative card.

The overall stats have remained unchanged as it is a very strong card, however we felt its low selection rate may be due to its upgrade path taking a long time to bring up it’s attacks. As such the attack stats have been brought slightly forward in the chain.

Currently identical to the MV71 Gun Drone, differentiating the two cards seemed better than reducing them by the same amount.

Rather than giving Tau access to too many cheap taunt cards, we thought raising the Ethereal Guards wounds would be a better option.

With such a varied roster available to the SotE we have looked at a few different aspects. Firstly, despite having some of the most numerous and varied psychic options, their psychic cards are rarely chosen so the following two cards have had a price reduction:

Secondly while also having some of the best ranged potential, again it is an infrequent build so we have helped out some of the weaker ranged options. While this may be partly due to current Warlord options, reworking Warlord was not something we prioritised on this balance pass:

Finally we took a look at Nork Deddog. As one of only two SotE Taunt cards we were surprised at how low his selection rate was so have adjusted him accordingly:

Space Marines suffer from noticeably the most expensive cards in the game, and while this is appropriate given they are the galaxy’s ultimate super soldiers, we felt that the mid-low cost Space Marine card costs were too prohibitive to a varied deck selection and so have adjusted the following cards:

We also have two higher cost cards with cost changes:

There are a further four cards that we felt needed help, but a cost reduction didn’t feel right so have had a stat change instead:

Stat Increase: +8 Base Wounds, +3 Base Melee

Much like the Space Marines, Chaos have a very expensive roster, and while they have a good selection of four and three cost cards, there is a drastic increase in cost after that point and so these changes aim to bridge part of that gap.

We also felt a change was needed for the most deadly swordsman in the galaxy:

Another faction with a somewhat surprisingly expensive lower tier of cards. These are the main cards targeted for points changes, as well as Ork melee cards which are definitely under-represented. Hopefully these changes combined with the Badrukk changes will mean fighting Orks will be more varied than one warlord and four to six cards.

One other notable points change for the Orks comes at the other end, and the most expensive card in the game is now coming down to be joint most expensive:

Our mad meks aren’t quite done, and three further cards have had stat increases rather than points changes:

While Tyranids have some of the broadest options for filler there are a few cards that felt a bit weak and were underused, so rather than just reducing points we’ve decided on a mix on points reduction and stat increases for a few of the lower end cards:

The following two cards we felt were at a good price point so have had a change to their stats instead:

Finally we also thought we would pay special attention to some of the Tyranid psykers. With every warlord having access to psychic attacks, and a very large pool of psychic options they are very low choice so we have looked at both Magus cards and given them both an increase:

Stat Increase: +38 Base Wounds, +7 Base Psychic

So overall we’ve made some small changes to two of the top decks, hopefully leveling them out a bit. The main piece of work has gone towards lifting the bottom end of the pile up for every faction, hopefully offering more options and more builds across the board. Additionally the move to alternating deployment and the effect that has on traits should help with more balanced trait interactions. We were confident about making this change for Ranked mode following the positive feedback we have had in the Campaigns. We also want to see how this change effects Ranked overall before making a wider change to Warlords and Traits.