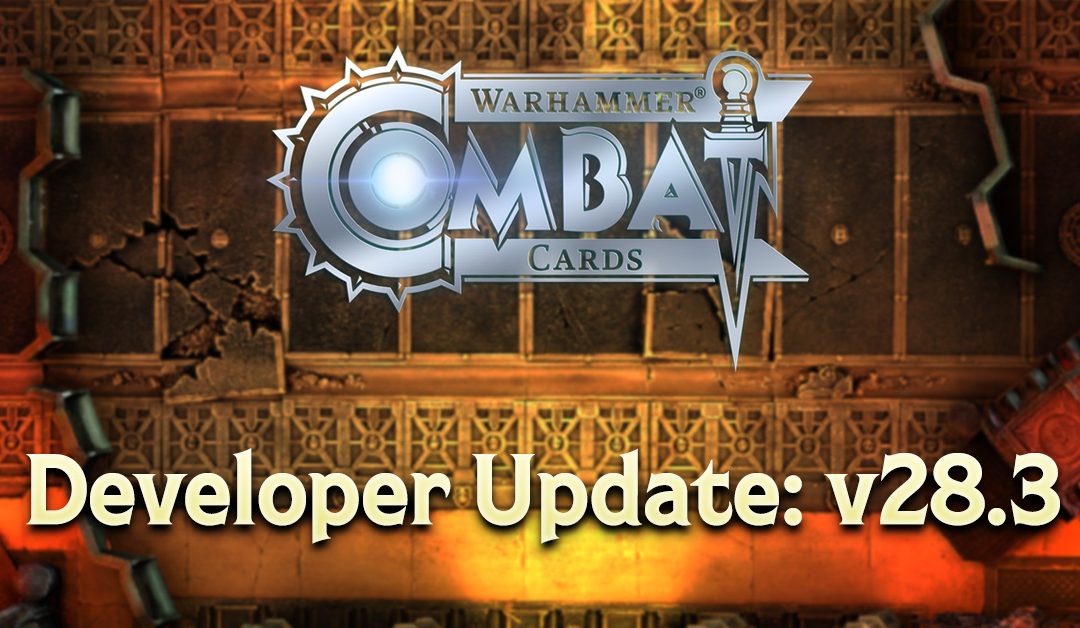 Welcome to another developer update! We’ve just released v28.3 which includes some new features that many of you have requested, so keep a look out for the update reaching you soon. We’ll be talking about the new features shortly, but first we wanted to discuss some other topics and give you all an update on how things are progressing.

It will not have escaped your attention that the game has had a few problems with connection, particularly during Campaigns being active. There are two main issues that we have been looking to address:

You may have noticed in recent weeks that the ‘Battle not found’ issue has largely disappeared, and that when it does occur it doesn’t cause energy loss! Stage 1 complete. The next step is to complete Stage 2 and ensure a smooth experience for players during times of increased server load. That work is currently underway, and requires the migration of our database from one service to another. Here’s our server engineer, Ricky, with a bit more technical information:

“We’re migrating from Firebase’s ‘Realtime Database’ to ‘TiKV’, which as it’s horizontally scalable should allow us to handle UNLIMITED LOAD (theoretically™). I’m also writing a reactive document store layer over ‘TiKV’ so that we can watch for changes in the database, meaning the server can notice changes in player profiles.”

We’re working to have this completed as soon as possible but database migration is a big task and we would rather not rush it and risk anything going wrong! Our current estimates mean this should be completed and tested within a few weeks, and we’ll let you know when this work is complete.

We have been working to make the matchmaking system provide a better experience for everyone recently, and we wanted to give a bit more context to what’s been happening in the old system and what is changing to improve it. Ash, one of our coders here at Well Played Games, had this to say:

“The problem with the current matchmaking system is that it uses pure Elo for finding matches and moving players/decks within the system. However, because we heavily encourage the use of different factions, the strength of a player’s deck can regularly change quite drastically as players tend to have different factions at different levels of progression.

We’ve looked into various alternate methods to use including other matchmaking algorithms, matchmaking per allegiance/faction/warlord and straight up just estimating a deck strength and only ever matching it against a deck with a similar strength. These all had various issues with them, but we’ve settled on a system that uses deck strength in combination with Elo to better match and move players/decks within the system. This should massively improve matchmaking when changing between decks of different strengths and should almost instantly guarantee a decent match while still maintaining a good player progression.”

We want this system to provide a balanced game. Losing all of the time isn’t fun, but neither is winning all of the time, so this system should provide a challenging but not frustrating experience. I’m happy to announce we’re very nearly ready to implement the new matchmaking system, and we will have more news on this next week.

We have reworked the objectives system, allowing us to add more objectives or fine tune existing ones with ease. We will announce in future when we add any new ones or make any adjustments, but in the meantime we’ve also introduced the option to refresh your objectives. Each slot can be refreshed for free every 24 hours, allowing you a bit more freedom over the objectives you want to complete!

Note that the first time you log in after updating, you may see some old objectives have completed again and you can claim them. This is a quirk of changing over to our new system for handling objectives, so if you’re close to completing an objective it might be best to wait until you have done so before updating. After that, enjoy your free XP!

Traits can now be tapped during the battle. This means that during deployment you can tap the trait of an enemy to see what they will do before you deploy your cards, or you can tap on your own cards to see their traits. In some instances this will be a little difficult to achieve (an enemy card being deployed and then using their trait for example) but this should give you a bit more insight and allow you to plan your battles a little more strategically.

The issues surrounding account linking have now been fixed. This has taken a little longer than we would have liked but that’s the nature of game development unfortunately. Account linking will be re-enabled by 30/10/19. If you have any issues with the system then please get in touch with Customer Support.

Head over to our in-game forums, r/WarhammerCombatCards, and Discord for discussion and let us know what you think of the new features!