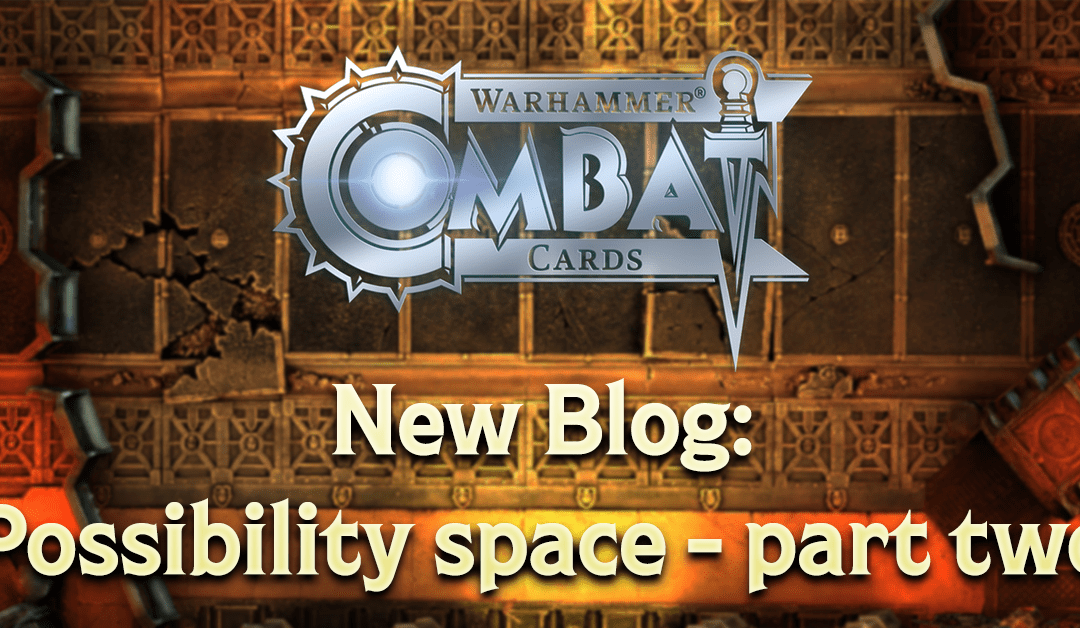 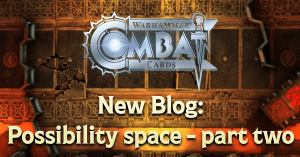 Welcome to part two of this look at what designers call the ‘possibility space’ (part one is here). Last week we discussed ‘width’, so this time we’ll cover the other axis – ‘depth’, and wrap up with a look at what all this means to Combat Cards.

On the other axis from width is a game’s depth, and this is determined by how deeply you can engage with each of its systems.

For example, a knockabout, arcade style karting game may not have much depth to its driving systems, but it will be ‘wide’; relying on weapons and crazy tracks to add interest (compared to a ‘serious’ race simulator, which will usually have incredible depth to its driving model, but may not be as wide – i.e. it won’t have weapons or shortcuts).

For the purposes of this piece, depth is how long can you play a game before you feel you’ve mastered its systems and know exactly how every scenario will play out.

If you find yourself downloading bite-sized games from the app stores then deleting them after a couple of goes, it’s because they have no depth so quickly become boring (that said, it can be therapeutic to play shallow games, letting your muscle memory take over and getting into a game’s ‘flow’).

Even though it has a very small possibility space, Combat Cards has quite a lot of depth. You can spend a long time building the ‘perfect’ deck for each Warlord, and carefully considering where to deploy and move your cards can win you seemingly impossible battles. Then there’s when to attack or Ready, when to take out enemy bodyguards or focus on their Warlord, plus out of battle ‘metagame’ decisions such as which cards to upgrade.

This was a deliberate decision for us, because as fans ourselves we felt that Warhammer 40,000 players want to be able to use tactics and mastery to do well, not just idly tap buttons or have luck determine who wins. But we also wanted to make a quick, easy to play game you can fit into short time gaps – therefore we chose giving the game depth over width.

So, now we’ve looked at a games’ width (the number of options you have) and depth (how much you can think about those options), we can see that those two dimensions give you a games’ possibility space.

We can also plot any game’s position on those axes, which is something game designers spend a lot of time thinking about. I’ll let you in on a little secret here – you don’t need any specific skills to be a game designer – it’s just thinking about stuff.

Before I get lynched by my colleagues, what I mean is that while technically anyone can do games design, the reason you need game designers is that it’s their full-time job to be thinking about this stuff so the rest of the team can be thinking about their stuff.

You’ll often see this in action in videogame studios – someone will suggest a cool idea which everyone gets excited about, but the designers will be the ones thinking ‘cool, but what does that do to the game’s possibility space, and is that a good thing for our intended audience?’ There can, in short, be an element of being a realist / party pooper to the role (though if someone’s idea does fit the intended audience then designers also get the fun job of turning a cool idea into an actual design, so it’s not all party poopery).

Let’s bring this all together and apply it to Combat Cards. With every feature we add to the game, we consider what that will do to our possibility space. Do we want to add more options and widen it? Or do we want to deepen it by adding more to think about in what we already have?

Keeping this balanced is key, because too far either way really limits who can enjoy the game. Too deep and it’s scary, too wide and it’s overwhelming. This is an ongoing topic for us, because it’s inevitable that Combat Cards will slowly become deeper and wider over time. We need to balance this to suit both players who’ve been with us for a while (who want the added depth and width), without overwhelming new players.

If you’ve made it this far, then thanks for letting me go on about a pretty abstract concept, but on the plus side you can now entertain yourself through even the dullest of games by working out if they should have added more depth or more width to make their gameplay more interesting.