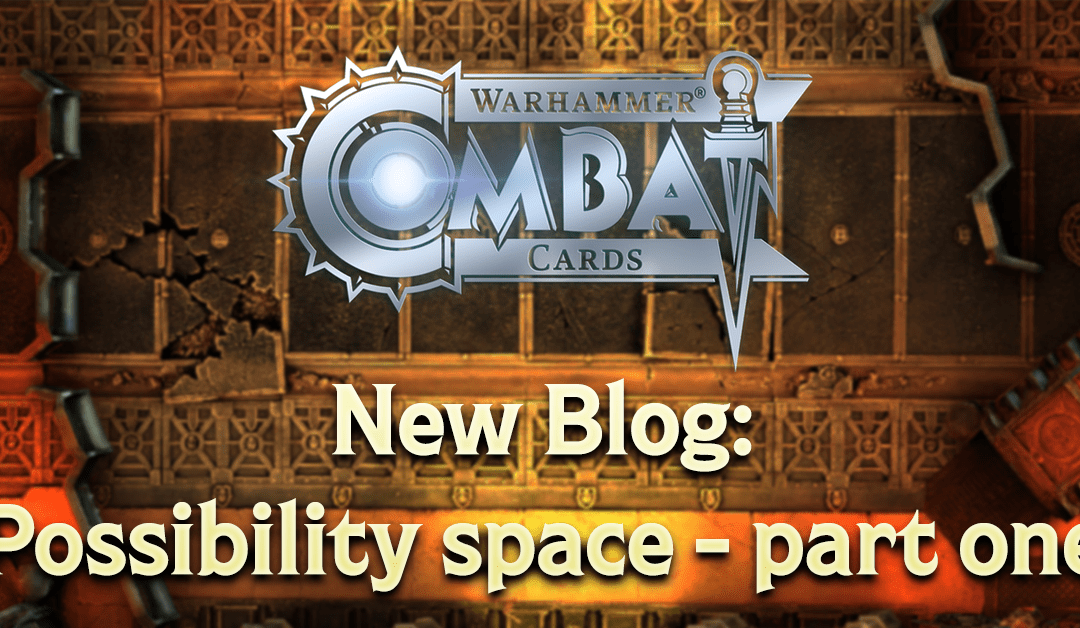 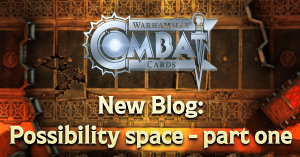 Today I’d like to discuss something called ‘the possibility space’ which – aside from sounding like a wicked sci-fi movie – is a game design term for everything it’s possible for you to do in a game.

You can read plenty of articles on possibility spaces, but this one is interesting. Basically, if designers can look at all the possible actions players can take in their game, then from that they can work out the game’s reactions to those actions.

And following on from that, they can think about the decisions these actions / reactions encourage players to make, the likely pace and tone of the game, and so on – and therefore the type of audience the game is likely to appeal to.

Sounds a bit complicated, so let me give some examples:

In a Combat Cards battle, the possibility space is actually very small:

That’s it. You can’t jump in a Rhino and go for a drive, you can’t grab a Bolter and make a headshot, and you can’t negotiate with the enemy Warlord to try and convince them to surrender.

Of course you could do any / all of those in another game, but the important thing is that you cannot do them in Combat Cards – therefore they are outside of the game’s possibility space.

It’s a good question, Bold Text Which I’m Pretending Is Written By Someone Else – why is this important?

It comes down to the possibility space’s ‘width’ and its ‘depth’, and what each of those brings to a game.

A game’s width is how many possible activities there are to do in it. A survival type game, for example, might be extremely wide, allowing players to move around, hunt, craft, talk, build, trade, ride, choose skills and upgrades, cook and eat stuff, survive weather systems and so on.

On the other hand, puzzle or fighting games aren’t usually very wide – there’s a limited number of actions you can take (punch the opponent / place the piece just there). But, these games tend towards depth over width – more on this in next week’s post.

As mentioned earlier, Combat Cards isn’t very wide – there aren’t that many ‘things’ to do. We could expand its width by adding more options to the possibility space – for example, we could add Stratagems you can trigger, or allow you to change your card’s formation or let you sacrifice cards for some benefit, things like that.

Each of these gives players another option (widening the possibility space), but they also make the game more complex because you now have more choices to make. Instead of looking at a few options and really thinking about which is best at this moment, you have a lot of factors to weigh up.

So while it might initially seem obvious that more choices are better, there have been many studies on how too much choice is overwhelming, causing us to have to rely on instinct or just get bored and give up (turns out we don’t like the feeling that we may have made a sub-optimal choice, so we’d rather avoid the decision altogether).

We’ll wrap this up next week by looking at depth, and what all this means to Combat Cards. As ever, please do let me know if you like / don’t like these sort of ‘design theory’ posts – I’d rather talk about things you find interesting, instead of just me.