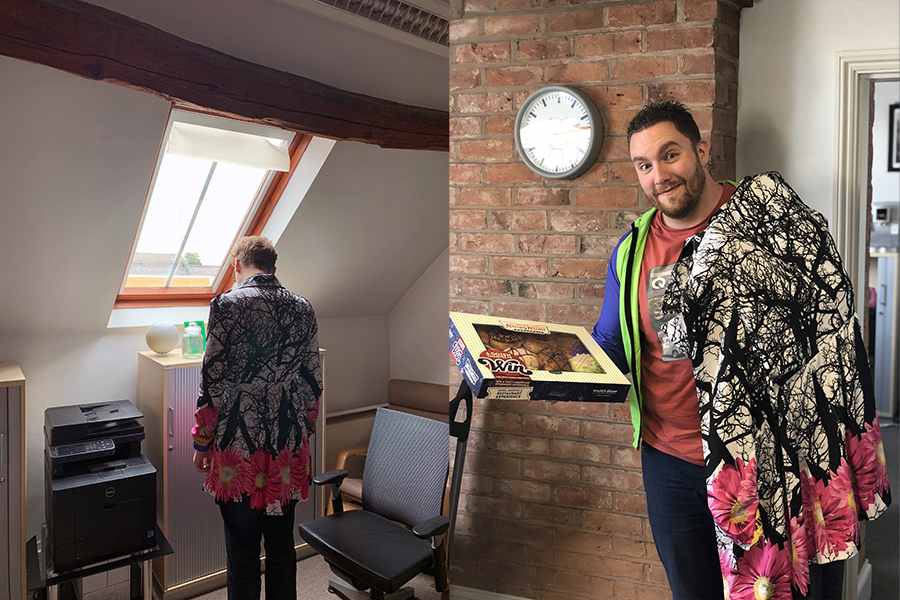 Hi, and welcome to the penultimate part of our painting challenge. If you’ve been following us you’ll have seen that each month we have to paint 10 Power / 100 points of Warhammer 40,000 miniatures or suffer a cake / humiliation based penalty (with one month off by using our ‘mulligan’). Because everyone has an extra month (six months to paint five groups of miniatures), some people who haven’t used their mulligan have finished the challenge already, while others have taken a painting break.

Last month both Adam and Deke failed the challenge, so here they are wearing the Two Thin Coats of shame.

Is it me, or does AdamC’s picture on the left look like an album cover from an insufferable 90’s band, and if ? 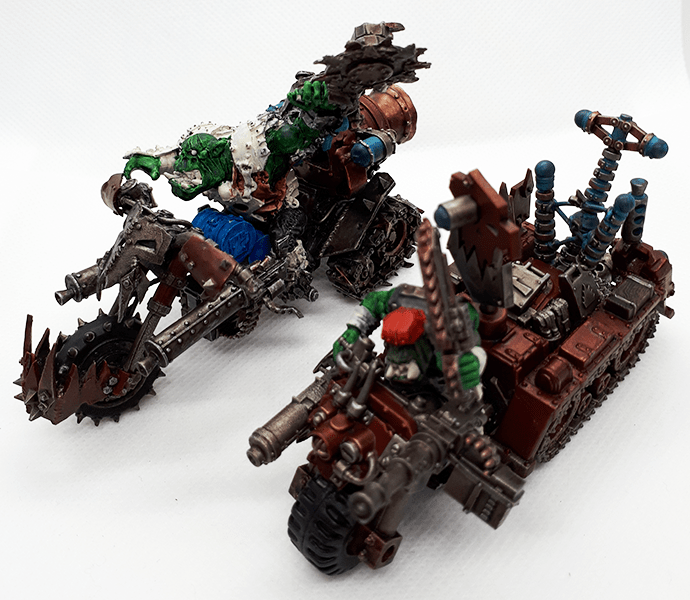 So this month was fun! I built a Big Mek on Bike with a Kustom Forcefield! While I finally managed to get my hands on Forgeworld’s Warboss on Bike miniature.

Though I didn’t leave enough time to finish all the painting wanted, so abandoned all previous attempts at painting Ork skin to go 100% with Contrast Paints. Although I’m still not completely happy with the results, it’ll make it much easier to paint my final 30 Orks next month.

This month I was really happy to paint my Shokkjump Dragsta, I much prefer painting these bigger models.

As for my first real jump into batch painting with these 10 Ork Boyz, all I can say is, thank Games workshop for Contrast Paints! I tried not to worry about all of their small details, as they are effectively my armies’ cannon fodder!

As this is my last entry I wanted to get the model count up as much as possible with my high cost army, it was time to add some guard to the mix. The storm shield is both cool and useful against those AP weapons.

This month I had a lot of life things going on, so I decided to try and save time by assembling my guys fully before painting. This was a mistake. The spears are mostly posed across body making it a pain to paint. I also ran out of my basing material so spent a lot of time trying to match it with a new technique. 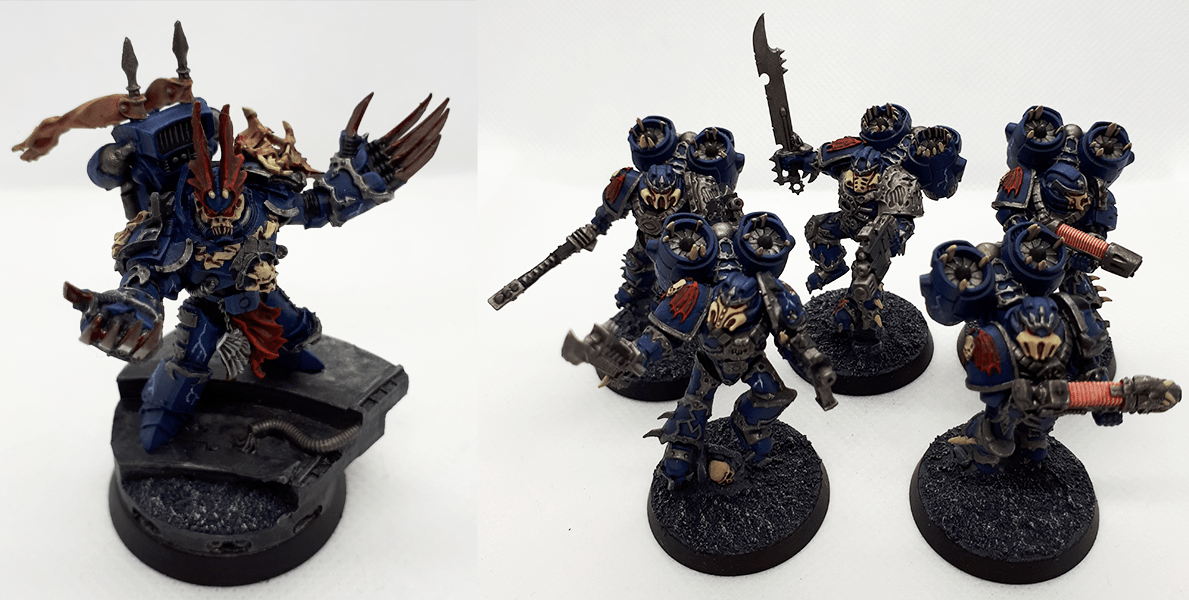 This month I painted the most obviously Night Lords part of my army, my Chaos Lord and a band of Raptors to accompany him.

I wanted my Chaos Lord to represent the classic choice of a jump pack and the Night Lord’s unique relic of the “Claws of the Black Hunt”. So I grabbed a Sevatar kit from Forge World to use as a base and picked the most vicious looking claws out of the spare parts from the Raptors kit. I then added on the jump pack I’d been saving from the Night Lord Praetor kit used for my Master of Executions.

The Raptors were kitted out fairly standard. I’ve stacked as much plasma into the squad as possible to benefit from my Lord’s aura of re-rolling any results of a 1 to hit. To tie them in with the rest of my models I painted the face-plates of their helmets bone white to echo the skull-faced motif of the whole army.

This month I finished my army with a Venerable Dreadnought and his +1. The main thing I learned was that I shouldn’t have stuck so much stuff on the Intercessor captain. The result is cool, but painting patterns on the inside of a chainsword sucks.

I’m super pleased with how the frost axe turned out and I’m glad I left the Dreadnought until the end. Let’s hope it survives more than a few turns. 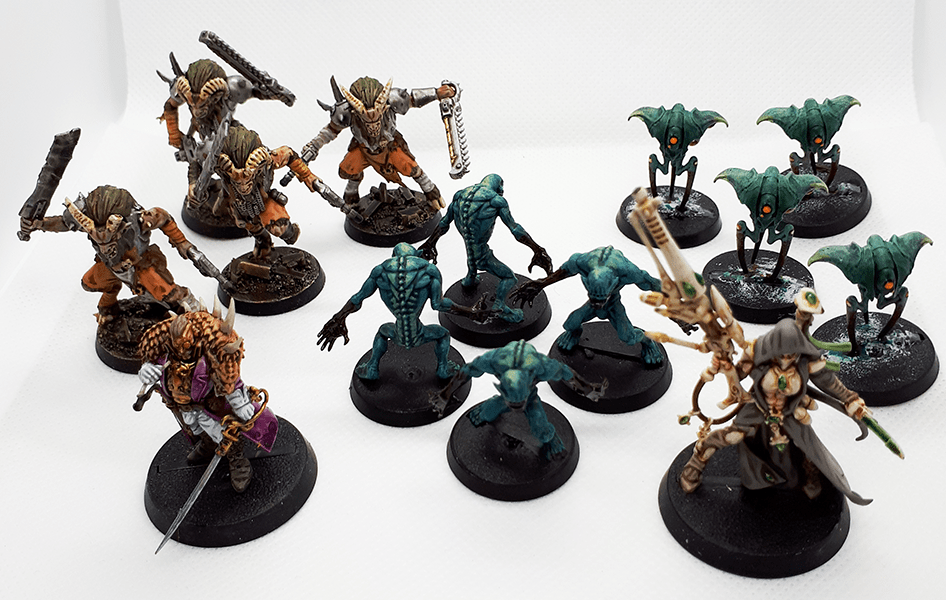 I took a break painting my Iron Warriors to paint some of the miniatures from the Blackstone Fortress game, which some friends and I are playing through (though the Beastmen are painted in the same colours as my Iron Warrior Cultists, so I can use them in 40K, too).

I used the change of project to experiment with Contrast Paints to get the hang of how they work before using them on an army sized project. They allowed me to paint the Ur-ghuls super quickly, and reminded me why it’s fun to go off and paint weirdly coloured aliens for a while! Next month, I’ll finish my Iron Warrior Greater Possessed and Master of Possession.

FAILED – Like Adam, Keith has conclusively answered the question ‘do painting challenges encourage you to get an army painted?’ with a resounding ‘no’. 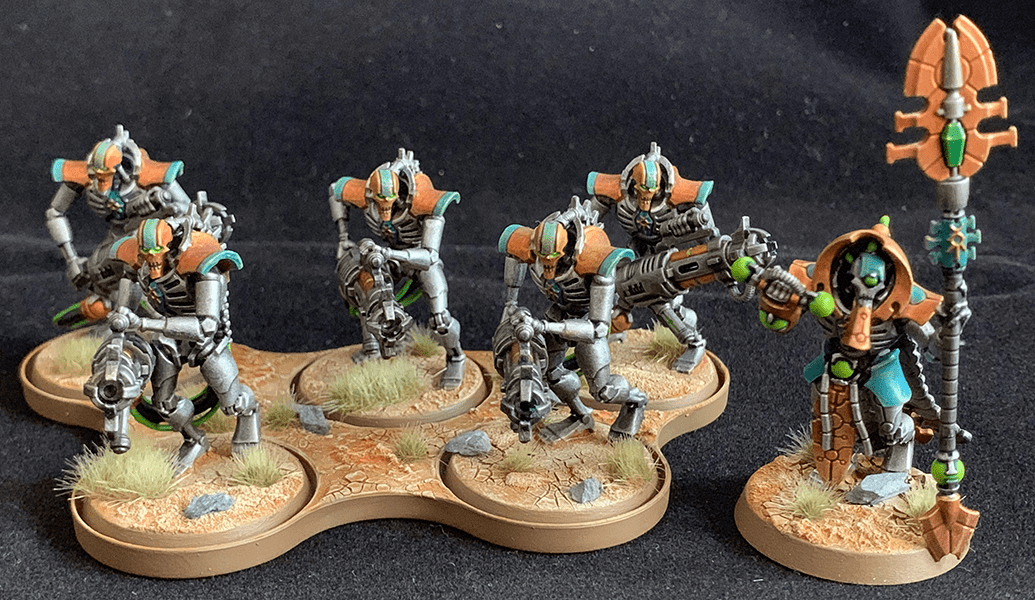 I managed to finish my custom-built Cryptek in a mad dash before a tournament on Saturday after leaving it a bit late (as always!) and then got the Immortals finished (with bonus movement tray) on Sunday.

I’ve got a busy last month ahead as I need to finish 5 more Immortals, 3 Canoptek Wraiths and also finish the Doomsday Ark I failed with last month. No pressure! 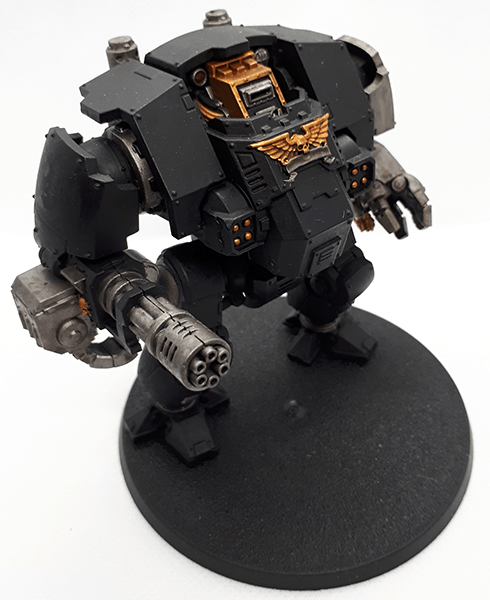 This month I painted an easy fit Dreadnought, so naturally it took me 2 months (I had to use my mulligan). Assembling this Dreadnought was a breeze but that made me realise how much I enjoy the assembly part of the hobby; I am slightly annoyed that I missed out on creating a custom position to compliment the other Dreadnought in my army.

For the final month I am painting a ragtag group of troops, which should be interesting! 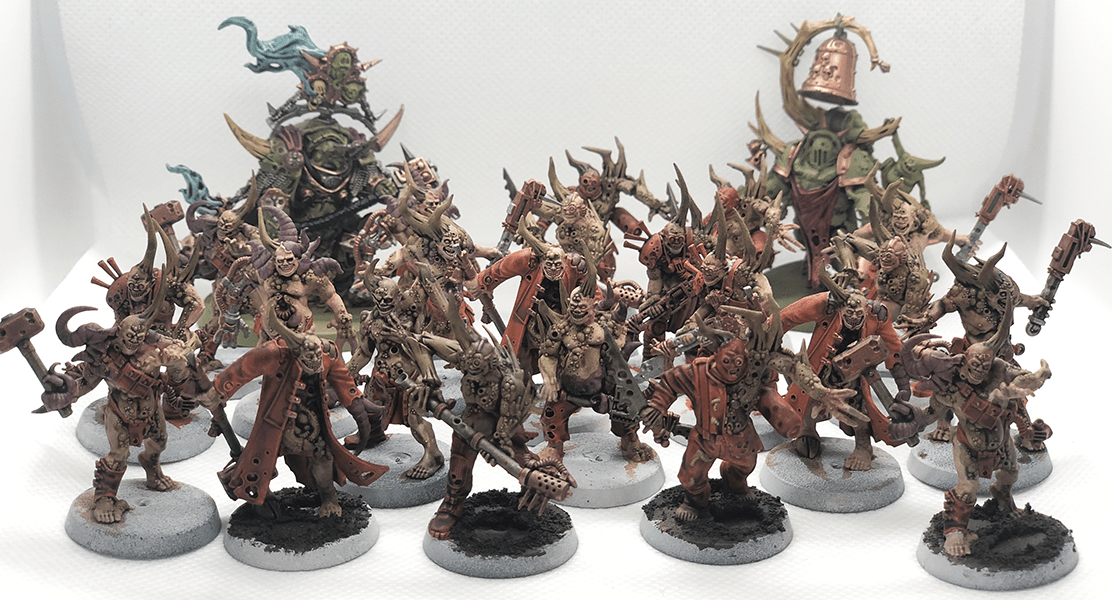 Papa Nurgle will be so proud, I have completed 30 Poxwalkers, plus my Lord of Contagion and Noxious Blightbringer are well on their way to being battle ready (just the Toxic Swamp bases to finish).

I had to sacrifice some of the finer details and highlighting purely for time constraint reasons to get these to near finished – which is thoroughly infuriating for a perfectionist. I used Gryph-hound Orange contrast paint to get the Poxwalkers’ clothing done faster and I am super happy with the results!

I can now say – haha I have 30 Poxwalkers Stu, see you on the battle field! (Stu’s note: Challenge accepted!) 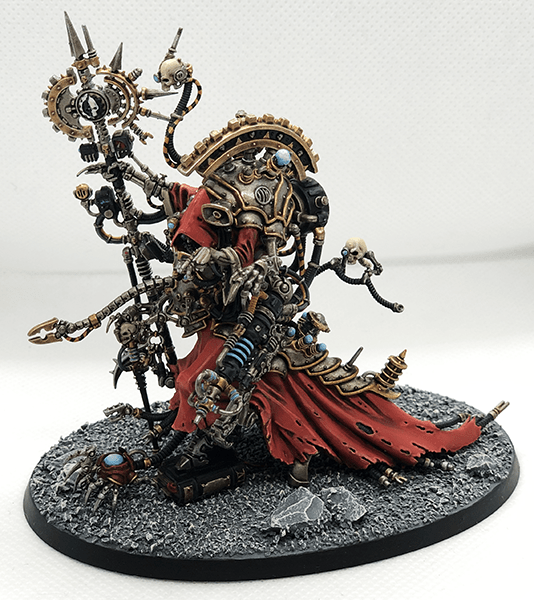 This month I have completed Belisarius Cawl, who was the most time consuming model I have ever done! If i see one more bundle of 4 different coloured cables, it may send me mad! Happy with the result but wish I had been able to source some grass tufts to make the base better, but that’s super minor.

Next month I will be finishing an Enginseer and an Ironstrider. Fingers crossed I have enough time!

FAILED – Unsurprisingly, AdamC failed again, though he doesn’t seem too worried for someone who challenged Deke to a battle, with a Tarte au Citron at stake. People in the know are using words like ‘thrashed’ and ‘humiliation’ when describing how AdamC’s going to do in that battle. 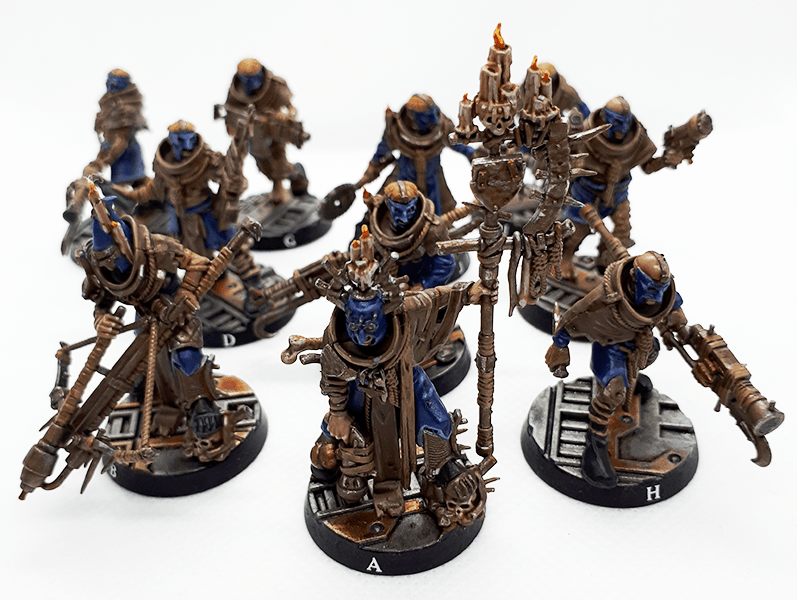 This month was the first time I’ve used Lahmian Medium in anger – which mixed with a bright red/brown over all the metal gave a really easy and nice rusty look.

The final post will be in four weeks, with more miniatures and AdamC + Keith failing once again. After that, we’ll have a post looking at our battles at Warhammer World, and the lessons we’ve all learned by taking part in this challenge (such as ‘never ask Keith or AdamC to paint something to a deadline). In the meantime you can get in touch by leaving a comment below, through our Facebook page or by mailing [email protected]